It’s truly surreal to me to even type that title.  Yes, the Bridge Run has been a goal for 4 long years now.  But, honestly, I doubted I’d ever check that one off of my list.  I’ve never made myself a priority…at least not since having children.  Anyone relate? ;)  It didn’t matter to me if I could run or not.  Things like making sure my babies are fed, schooled, and loved and that my home is somewhat presentable when my husband gets home have long since taken priority over getting a little “me” time in there somewhere…especially enough of it to train to run 6.2 miles.

I have always thought it would be quite an accomplishment to run the Bridge.  One that I definitely wanted to do for my daughter.  But, being completely honest with you…I had begun the Couch to 5K twice and quit.   So, as much as I wanted to run the Bridge, I certainly never thought I actually would be able to do so.  But, all that changed this past Saturday morning.

One of Annabelle’s amazing nurses, Joy, and her hubby (& puppy, Chloe) opened their home to us to stay Friday night.  We enjoyed a relaxing, kid friendly dinner out on Seabrook Island along with another one of our favorite nurses, Bryna, and her hubby and sweet baby boy that has grown up way too quickly!  Then, it was back to Joy & Ryan’s home for some sleep!

The alarm went off at 4:55 and I was up!  I usually hit snooze a time or two but was already half awake anyways.  So, I got up and got dressed.  Then, Scott got up and finally we got the boys up and ready to go.  We were out the door by 5:30.   Y’all, I was a bundle of nerves!  I don’t normally eat breakfast before I run so I just grabbed a banana and some water to hold me over until the start at 8am.

We made great time getting to Mt. Pleasant where the race begins.  Scott dropped me off within reasonable walking distance to the start line by 6:20.  I kissed him and the boys and we set a place to meet at the finish.  He also told me about where he was hoping to stand to see me run down King Street.  With nearly 44,000 runners we were just hoping to find each other at the end.  I walked alone in the dark towards the start.  The world was just waking up but the start line area was buzzing big time!

I’ve read running blogs like crazy lately and learned that it’s very important to make sure to potty before the run.  So, I went in the portapotty and just couldn’t even think about squatting.  It was dark and disgusting and I am a bathroom freak.  Trust me,  I had tons of bladder and kidney issues growing up because I would go all day without going to the potty at school.  I just can’t do it!  So…within 10 seconds of walking in the portapotty, I walked out.  Nothing accomplished but sanitizing my hands. :)

I continued to walk around and finally landed upon some tucked away restrooms with real running water and a toilet that flushed.  I was so happy!  I knew this was Heaven smiling down.   I had already had a lot of water and little did I know the wait that was ahead!

So…after trying to meet up with a dear friend and then running into other friends, I got settled in my corral at 7:40.  The race was set to begin in 20 minutes…I was stretched and pottied and raring to go!

That’s when I should have sat down.

But, the announcer kept us holding on for over an hour later.  Apparently, there were some technical difficulties or they couldn’t get clearance to close the bridge or something because the race didn’t begin until 9:10!  Ridiculous for a race this huge. At this point I had been on my feet for nearly 3 hours…and then I was supposed to run 6 more?!?!  Seriously???  I just wanted to pee again and eat!

I took off at the Start Line feeling tired and hungry and ready to be done.  Not at all the way I had it planned out in my head.  Surprisingly, I felt strong the first two mile stretch heading to the foot of the Bridge.  I had some people flying by me but I held steady at a pace I knew I could keep.  Although I wondered why they were in my corral if they were going so fast?!

I hit the bottom of the bridge and began to feel the tiredness in my legs.  Standing for almost 3 hours without much water and half a banana had taken its toll on me.  I pressed on focusing on just putting one foot in front of the other…making each step count.

As I climbed further up the Bridge, the wind picked up.  It was strong but I knew I was stronger.  I have trained in some pretty tough wind this winter and knew I could manage it.  It was sometime around now that I was just barely able to see downtown Charleston over the bridge.

About a mile later and I was almost at the top.  I was slowly passing others that had previously flown by me.  I heard one guy mention to his buddy how many girls were passing them…he was “embarassed”. :)

I wanted to quit so badly at this point.  My mind was fighting my body…rarely has my body been stronger.  But, then I glanced over and saw a chunk of medical buildings on the Peninsula of Charleston.  They were so obvious to me.  And I recognized one of them particularly.  It was the main hospital at MUSC.

My mind immediately went back to that place four years ago.  The hours upon hours sitting by Annabelle’s bedside…reading to her…singing to her…longing to hold her and feel her safe in my arms.  The prayers spoken hand in hand with my husband as we sent her into open heart surgery.  The peace HE gave us as we waited for her.  I had been through and survived so much more than this Bridge could ever give me.

I don’t quit.  I may want to and I may have every reason to but I don’t quit. And, this time would be no different.

Before I knew it, I was beginning my downhill towards Charleston.  The harsh wind became a cool breeze.  I was over half the way finished.  I wanted to enjoy every last step of this journey.

Streets that at one time I was so lost on were as familiar to me as the back of my hand.  I knew exactly where I was and had memories on those roads.  On Saturday, I was making a new memory as I celebrated the past that had brought me there.  I saw a “Butterfly” store that I hadn’t seen before and, just a few blocks down, saw my three boys searching the crowd for me.  I ran over and kissed them and told my husband “I think I am going to die” with a big ole’ smile on my face.

My body wanted to stop on the way up that Bridge but my mind wouldn’t let it.    A struggle that I fight daily.   This shell that my soul is housed in is only human but my soul, my mind is so much greater.  It sees the greater purpose and pushes me to obtain it.

I had less than a mile to go to the finish.  It was my slowest mile…not because I was tired but because I was choosing to slow down a little.  I knew my goal of one hour was blown.  The crowd was so huge and I had spent the first four miles just weaving around people.  My focus was on finishing strong and, most importantly, enjoying the ride.  And I did just that.

I crossed the finish, found my boys, and grabbed some water.  I wasn’t much interested in the after party.  I just wanted to be with them.  The emotions had caught up with me.  I cried on the way back to Joy’s house.  That full circle moment that I thought I’d never be strong enough to obtain was my reality.

I had run the Bridge Run.  Against all odds…hungry, thirsty, tired from standing, and beginning one hour late.  And, I finished it.

The rest of the day was spent relaxing with friends and delivering Annabelle Baskets while Luke and Scott napped in the van.  Poor Little Bear was worn slap out! 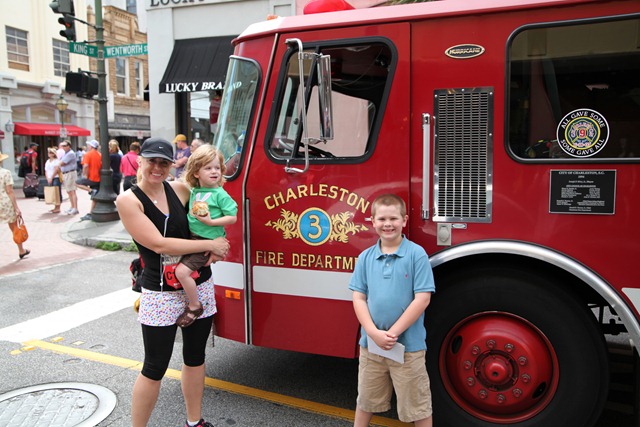 Boys and fire trucks…we couldn’t get by this one without a picture! :)

I know I've told you, but I'm so proud of you!! What an accomplishment after all it took juts to get the race started! Now onto our half! :)

That is a tough run, yea for you!