About 5 months ago, I registered my hubby to run a 12k with me.  The pull to get him to run it was that it was for the Ray Tanner Foundation (our former baseball coach & current AD at USC) and you finished the race crossing home plate in Carolina Stadium.  That is the stadium that the his former company built and he was over the safety for all of it.  It’s also home to 2 recent National Championship College World Series Baseball Trophies.   As we were finishing the race, I asked him if he had ever been on that field before (sarcastically, of course!).  He does have some good memories of it.  He hosted a ball game for all the construction guys that had worked on building it  just before they put the grass down and goodness knows Wyatt has more than his fair share of SEC Conference baseballs that he plays with in the yard (most of which were foul balls Scott picked up off the roof when they were building it)…so, I do think he enjoyed it.  That being said, I am pretty sure he has no desire to do it again. ;)

I love that my husband supports my running.  I love that he takes care of anything that needs to be done on Saturday mornings around the house so that I can spend time with my sole sisters pounding the pavement.  I love that he encourages me to put me first and do something I enjoy.  I love that, on occasion, he’ll join me for a race even when he would rather be cheering at the finish line.  And, I really love that he is always, always praying me through…because he knows far more than anyone else the healing that running has given me.   I am so blessed to call him mine.

So…now that all that mushy stuff is out of the way here are a few pics from our 12K! 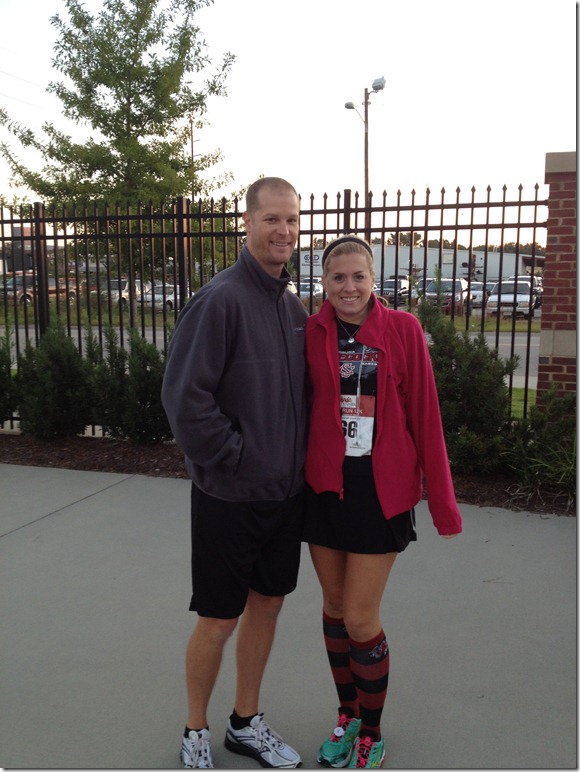 Chilly start!!! Those socks are not expensive compression socks either (if you can’t tell).  They are cheapo socks from Wally World that reminded me of Where’s Waldo but in Carolina colors with Gamecocks at the top.  Why not, huh? 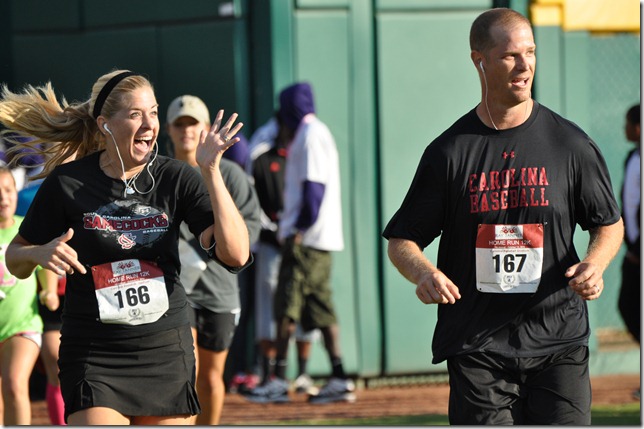 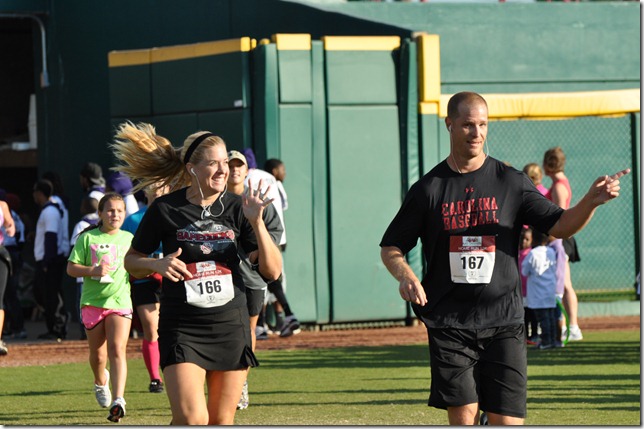 When Scott saw this picture he said that he looked like a politician and I’ll be darned if he doesn’t! So funny! 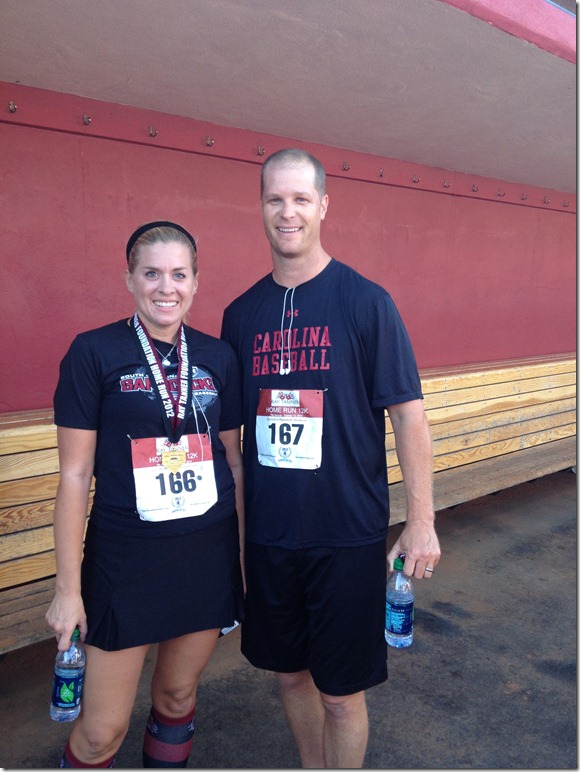 In the dugout at the end! There was some guy standing there blocking it and Scott said he didn’t think we could go in.  But, I just politely said “excuse me” and then asked the guy to take our picture. Ha! They let all those stinky, sweaty 19 year old boys in there with dirty cleats so I didn’t think it was a big deal if we just had the stinky part and went in. I don’t even think Scott put his medal on.  Although he did want to hang it up in our bedroom…um, no!

Overall it was a good race.  The only thing that bothered me was that the 5k runners/walkers ended up on the same course at the end and I spent about the last 2 miles having to weave around them.  As in running out into the unblocked lanes,  jumping on the sidewalks, etc. It was very frustrating for someone who was really trying to push for time.  I’m not sure how they could remedy that but I’ve heard a lot of other runners say the same thing.

We finished with a 9:22 average pace making our finish time 1 hour & 9 minutes (and a lot of seconds that make the time look much closer to 1:10 so we’ll leave those out!).

Next up…Kiawah Island Half Marathon!   I’ve already got the socks for it, too! Pink with red hearts…

i've been reading your blog for a while but have never commented. i live in the upstate of SC. what running program did you use to train? i'm considering running the Charleston 1/2 in January. i have lots of running friends but i don't want them to know, you know just in case i don't run it.

The B Family said...

Hey Shanna~ Thanks so much for following along! I totally get your question...definitely been there! I started doing the Couch to 5k program September 2011 (it's all over the internet & very user friendly). There were many weeks of that plan that I had to repeat...I literally could not run for 60 seconds when I started. That was a huge help for me in the beginning. I then trained for a 10k by slowly increasing my longest run by 1/2 a mile each week. I finished my first 10k on Annabelle's birthday last year (1/28). Since getting beyond that & very comfortable with 3 mile runs (which are now my shortest runs), I have used Hal Higdon's half marathon training plans. He has several that let you choose based on ability. I did the Novice 1 for my first half since my goal was just to finish and am doing a combo of Novice 2/Intermediate for Kiawah. Take is slow and easy...listen to your body, too. I think I've been able to avoid injury by not pushing myself too hard but still being very consistent. You can totally do it!!! Good Luck & let me know if you have any other questions!!

Thank you for the input, i will look up both of those.
I have friends who have ran the Kiawah 1/2 and they loved it. I went down with a group of girls for "moral support" to the Savannah Rock & Roll Marathon and 1/2 last November. Everyone seemed to enjoy it but they had to run through some pretty rough parts of Savannah.
Thanks again and I'll keep you posted!