I let Wyatt take over the photographer duties the other day. Luke loves to watch every single move he makes! 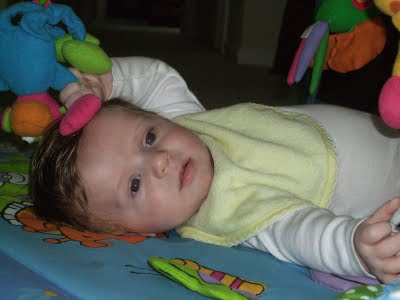 I'm pretty sure that Luke wants to be just like his big brother when he grows up! 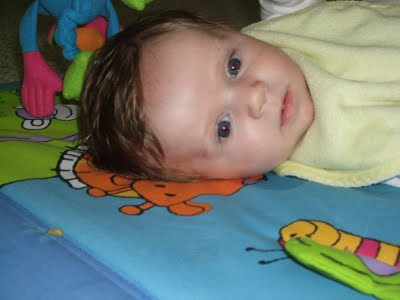 He tracks Wyatt across the room & "talks" to him non-stop! 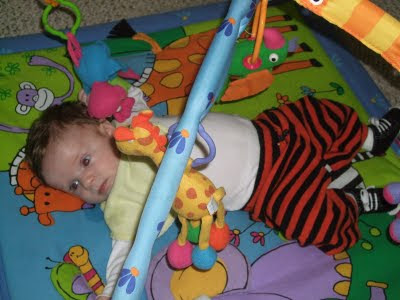 Wyatt thinks it's pretty awesome having a little brother, too!

It's no secret at our home that we have begun over the past couple of years pulling for the Gators (as in Florida)...more specifically, we pull for their quarterback, Tim Tebow. Scott got me hooked when he told me that he was homeschooled and Wyatt followed suit. Wyatt LOVES to watch him each week to see what scripture is going to be on his eye black during the game. Last week, TT chose Psalm 23:1 so guess what scripture Wyatt wanted to learn?!?! You guessed it! I decided we'd learn the entire Psalm and not just the verse. We worked on the first five verses last week and were adding to it today when Wyatt put it all together...the conversation went something like this:

Mommy & Wyatt (all to a little tune we made up): "The Lord is my shepherd, I shall lack nothing, He makes me lay down in green pastures. He leads me beside quiet waters. He restores my soul. He guides me in paths of righteousness for his name's sake. Even though I walk through the valley of the shadow of death, I will fear no evil for you are with me"

Wyatt: Oh, Mommy, I know how they get all those touchdowns! God opens up the paths of righteousness and they run right through and, bam, they whoop up on the other team!

Mommy (totally at a loss for words): Um, uh...something like that, son. Awesome how God works, isn't it?

And one more Wyatt quote for the day:

After we finished dinner, Wyatt looked at Luke and said "You get to have some spaghetti milk in a little bit, Lukie!"

Sweet!!
I remember you finding the little camera that Wyatt had been taking pictures of Miss Annabelle on...He is quite the little photographer of his cute siblings! What a couple of cute shots he got of Luke!

Love the exchange over the interpretation of the verse - priceless!!

Want to hear how Sunday went - will give you a call later today!

Luke is such a precious, precious baby! He looks like a little man in a baby's body with all that hair! Wyatt is clearly adjusting to having a little brother! Noah wants one too (and he wants to name him Kevin)... he thinks it would be the perfect way for him to get a bunk bed :)

I love the quotes from Wyatt too... those are hysterical! I am always amazed by how the little ones' minds work!

Thanks for giving us a picture fix of the sweet baby!

Yum spaghetti milk!!! He is so funny! Your boys are precious!!