Luke's 1st Haircut, you were right!!! (Although, he did almost go into church yesterday with one of Annabelle's hairbows in! We grabbed it as we were walking out the door of our home to take to her special place after church & just stuck it in his hair to hold on to it. Good thing I saw it just as we were about to walk through the welcoming doors!)

His wings were just about to carry him away & Scott had been begging me for weeks to take care of those suckers...so I had to. There was a brief pause as I began but as soon as I saw just how cute his little do was turning out- it was all smiles from there on out!

Here's the before picture. We call this the "crazy professor" hairdo! 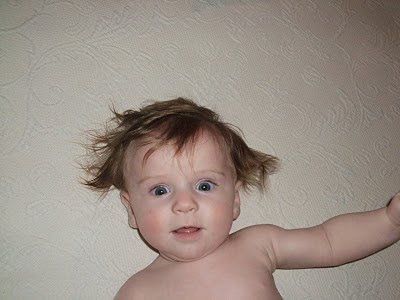 Luke's got the serious face in this one! He must of known that I didn't have a clue what I was doing! 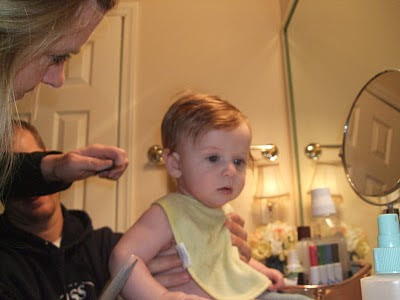 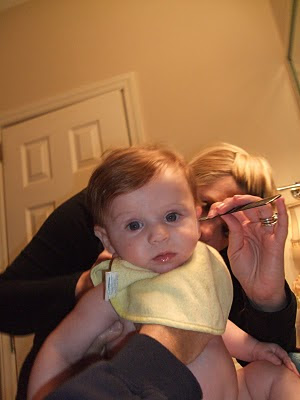 And...the after picture! He seems to love it, too! 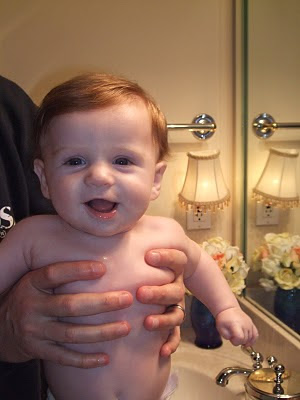 And, since I had scissors in my hands and Scott was trying to keep our little bobblehead still...all of these pictures are courtesy of Wyatt, of course!
Posted by The B Family at 8:01 PM

Hey you did a good job!! Your aunt would be proud. :) I'm glad you said Wyatt was taking the pictures...I was wondering!

I love the haircut! Well Rebecca, you may have a career as a hair stylist to fall back on! Hope to see you all soon!
love,
Erica

Oh what a little cutie Rebecca!! You did an awesome job...can my boys come be your client?! :) It may take Greyson awhile, though! Ha!! Luke was such a little trooper letting you cut his hair! Tell Wyatt he did a great job taking the pictures, too!

Oh, Rebecca! He is just so precious!! The crazy professor picture is hilarious! You did a great job. Now he looks like a little preacher :) I can't believe how big he's getting - and how much he is changing! I am hoping that we have a snow day tomorrow (we're expecting one) so I can call you! I look forward to talking to you!

Good job Wyatt! And Luke is so very handsome.

awwww! He looks like such a big boy with his new 'do! Such a beautiful baby boy!!!

SO CUTE! Mine is 11 months old and still no sign of a haircut in his future!!!!