For most, baby steps are just that. Not around these parts...baby steps are big steps especially when it comes to, well, baby stuff. (Appropriately stated, huh?)

We took a big, baby step this weekend.
I hinted to it a little in the last post...we had been shopping and purchased a new travel system for Luke. I am so blessed with family and friends who are joining us in celebrating this new gift and precious baby boy by giving him a couple of showers. Well, along with the showers came the registering. I put it off about as long as I could until I knew the invitations were in the mail and I had to do it. Scott met me at the baby overload superstore that is Babies R Us. I, of course, had my list in hand so that I wouldn't spend too much time getting caught up in there...knowing it would be hard enough. The one big thing that we really needed (so, maybe there were a few more things but my daddy took care of the other ones on our baby shopping spree the other week:)) was a travel system...the whole car seat & stroller combo deal that's imperative that first year.
As most of you know, Annabelle passed from this life to Heaven while in her car seat. It was Wyatt's car seat first and, to save money, we just reused it for her. I have run into it once, on accident, in Scott's office many months ago and just wept over it. Everything is left in it just as it was that morning...her pink blanket, her rattle toys hanging from the handle & her monogrammed pacifier holder with her binky still attached. Scott wrapped it up for us and has put it in the attic so that I don't bump into it again...unless I want to. Since losing Annabelle, I have not been able to look at another baby in their car seat or a car seat just sitting by itself without getting upset. It's been hard. That's why this was a BIG, baby step.
So, getting back to the shopping...I knew that the day was coming where I would have to look at them again and, sigh, pick one out for Luke. Our first attempt at registering went really well, except that I didn't have it in me to go down the car seat/travel system aisles. My better half checked them all out & hit the trigger to register one for us. I finally looked it up on the computer just so I would know.
A couple of months have passed...my heart has been soaring over anticipating another baby boy...and opening all the precious blue gifts has proved to be healing all in itself. We had been given some gift cards and knew just what we were going to use them on...the travel system. We went as a family to take this big, baby step. It went well and I was really thrilled with the one we ended up getting. (It was different from the one we registered for because it's a newer one that they just started carrying and I LOVE the pattern!)
Man, I am all over the place trying to tell this little story...preggo brain?
Anyways, back to this weekend...I have been nesting, terribly if you ask Scott, and I am so ready to fill my arms with a new life that we decided to take another big, baby step and install the car seat. It was bittersweet at first but mostly just sweet. The seating arrangement is different than it was with our baby girl, as it should be, and this just feels so good! 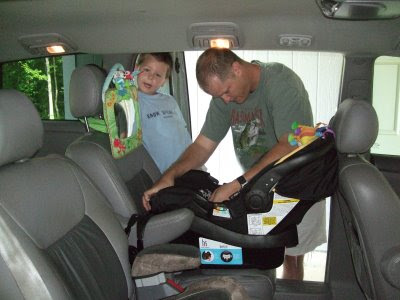 Scott getting it all secure & Wyatt supervising, of course! 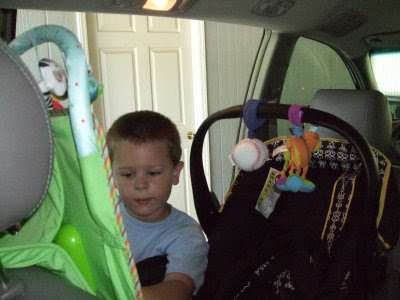 Wyatt installed the mirror/toy thingy all by himself! He was so proud!
Posted by The B Family at 2:34 PM

YAY!! I am so excited for you!!! I know you are so ready to hold little Luke in your arms! By the way - you look great in the pic from your last post! :) I can only imagine how hard it was seeing Annabelle's carseat. I know you did the right thing in buying a new one. I remember after we lost Gracee - I think everybody in South Carolina had the Graco jungle animal print carseat/stroller combo! I held back so many tears everytime I saw one with a sweet little baby in it. Luke will never take the place of Annabelle - but trust me -he will help fill a huge void!

I am still trying to get my ducks in a row with the bears. I will let you know - hopefully I will be able to start by Chistmas!

Talk to you soon!

I admire the way in which you are embracing change and opening your heart up more and more every day.

And Wyatt... he looks like he is more than ready to take on his big brother role! What a cutie!

And by the way, I love the carseat pattern :)

Yay! It's just perfect!
I still keep thinking about Greyson patting your tummy! I think he's excited for his little buddy to arrive! :)

Rebecca,
I love the pictures, and I'm so proud for you that you were able to take this big step and get it behind you...just another step to healing! I can't wait to see the little chubs who will fill that carseat!!

I am so proud of you my friend! Thank you.....for finally spitting it out! ha ha Just kidding. I think to this day, I have preggo brain! Love you~
Suzie

Bless your sweet heart. I know that was hard. But you are right, that new one does just fit your car! I'm so excited for you!

So precious..thank you for sharing your heart..you are so open and honest..I sometimes feel like I can see inside your heart..You Are an Amazing Woman Rebecca..and God chose you out of all the women in the world for Miss Annabelle and he has chosen you for Luke as well.. Your heart will hold them both and Wyatt in their own special places...God will give you courage when you have none, hold you when you are scared, comfort you when you feel frightened or unsure, and catch your tears as they fall, and He will bring you Joy and Sunshine with the birth of this precious gift and you know how when the sun shines through a window..and the rays show little particals of light....there will be Annabelle..your little angel surrounding you all watching over her family. You are a Blessing to me and an inspiration and I pray for all that is Good for you and your Beautiful Family. I can't wait to meet Luke. God Bless you as you welcome your newest addition.
Love always,
Rhonda Lyle

THis is a big deal friend! Thank you for your constant honesty about where the Lord has you in grief and processing. Praying that this baby is a gift of much healing.

Wyatt looks so proud helping put that in!

For months, I have been coming and just reading, just crying, just praying, and just being awed at our God. I really want a second child of my own and my husband is not ready. We have one little 4 year old sweetheart named Heidi. Your story gives me hope that this day is not far off.

You have taught me that God is so merciful. I was also waiting to hear that Luke was a girl, but God has this amazing plan for us, and I am confident that another little girl will be born to you someday.

I just wanted to extend a HUGE hug to you and your family. Scott is so supportive and I loved that he wrapped the carseat in case you want to see it again.

One thing I really want to say to you today dear is just how fitting Luke is for your little sweetie. As you know Luke was the beloved physician. Your little angel comes as a "Doctor" to heal your family's pain.

I love the pictures. Wyatt putting in the mirror is so sweet. I love the picture of you and Wyatt together in your last post too. That's a great picture!! Mom had a great time showing Wyatt around and spending time with y'all the other day. She was so glad she was there when you came. She can't wait for you to be there for Luke's birth. You are in my prayers even more these last few weeks.

Thank you for your blog. I've been reading several blogs written by families affected by HLHS since our son was diagnosed at our 20-week ultrasound almost 7 weeks ago. My husband and I were devastated at the news, but God has brought His peace upon us and we are resting in Him for the safety and health of our son. We too will be at MUSC for Chase's birth and surgeries. My heart breaks for you and your family following the loss of sweet Annabelle. I was shocked as I read through your blog from the beginning. I couldn't convince myself to keep reading to see if you posted exactly what happened to her. It seemed she was doing so very well! I'm so scared about the future but I do find encouragement in your faith and strength to get through the most difficult situation imaginable.

Congratulations on the upcoming birth of baby Luke! I pray God's blessing unfold for you and your family!