What a whirlwind! Yesterday, we checked out of the hotel in Tianjin just after breakfast & headed to the airport for what was supposed to be a quick 2 1/2 hour flight south to Guangzhou where all the USA side of things has to happen as the US Consulate is located here.

Once we got through security & found our gate, we realized that the flight in front of ours was delayed...as ours also read delayed.  The thing though is that in China they don't tell you when it's rescheduled...the box where the flight departure time is located is blank.  So we waited and waited and waited.  Ailee James did amazing.  Finally, our plane arrived & we were moved to another gate to board but then the Chinese military/government apparently decided to run some live fire drills to flex their muscles to Korea.  And when the Chinese military does something, no one here asks questions.  The military also won't tell you how long this will take and doesn't give anyone a heads up beforehand either.  So, the airline stewardess just says to the masses waiting for now over 8 hours "Flight is delayed. Get on shuttle and go to hotel to wait."  I had, at this point, already gone through all the diapers and formula that I had packed for what was supposed to be a quick half day trip...and desperately needed our luggage back off the plane if this was going to draw on out any further.  A kind man from Wichita, Kansas who lives in China for work (& has for 12 years) told me this happens quite frequently and that one time he sat in a nasty hotel for nearly 2 1/2 days.  So, yeah, I wasn't going.

He helped us (as he speaks Mandarin) retrieve our bags and then I called another friend who lives in Shanghai to help me make a decision about what to do as she is familiar with these controlling military tactics also.  We waited it out a bit and then had to choose...we went to the hotel with one other Korean man who spoke very little English just praying that we would be safe.  No one bucks the system here or asks why or even tries to question why things happen the way they do.  They heartbreaking thing to me is that for the most part every single person I've encountered in this country both this adoption and with Andie-Grace have been kind, caring people.  They are trapped...that's why our first female guide who is trying to get pregnant with her first child is afraid and why she said over and over how lucky Ailee James is.  It's devastating to live without knowing what true freedom looks and feels like...not just from your government's power but from Jesus.

Wyatt, AJ & I took a bus to the hotel that was less than anything I've ever seen or stayed in before.  The toilet didn't flush and the sink didn't drain.  It smelled so heavily of old cigarette smoke that we all had to wear face masks inside and could still smell the smoke through them.  We were afraid to sit down and were fearful over how long this may go on.  My son wept profusely and looked me in the eyes saying "Mom, I will never for one second take my freedom for granted again."

Just as a prayer chain began on the other side of the world at home, mountains moved and within minutes we were called to be on the bus back to the airport within 10 minutes.

What I left out earlier is that when the announcement was made to go to the hotel, a man from LA saw me at the counter in tears over what this meant.  He saw me explain to someone who hardly understood a word that I said how I desperately needed to be in Guangzhou by the morning to make a medical appointment for my daughter...how getting her visa to come to America was dependent on it.  He stood and watched and you could see the concern in his eyes.  But I didn't know at that time that he understood what I was saying....but just as we all quickly filled the most disgusting hotel's lobby I've ever seen, he appeared by my side.  He said "What is this mission you are on?"  We sat together on the shuttle bus back to the airport and I was able to share with him my faith...that we adopt because we are the adopted.  That we do hard things and know that persecution will come not because Jesus wants us to be persecuted but because He withstood the most horrific punishment for us...and redeemed our lives by doing so.  He said that he knew one person who was a Christian but that he was beaten as a child and never thought about it again...I told him that the true testament of a follower of Christ is the way they live their life and that I know Jesus wept over a child unjustly being abused.  He told me that he does charitable work and attends galas and helps formulate medication to help sick children but that he's always felt it wasn't enough...and that something was missing.  We shared stories and I spoke with a boldness that only could have come from God Himself.  I quoted scripture for him that I've been memorizing to strengthen me through this journey and he said "Now that I see how you live, I want to reexamine Christian faith."  A seed was planted...and he asked to take a photo to remember the way "real people that love Jesus live".  I pray I see him in Glory.  Wyatt witnessed this conversation and whispered to me as we were getting off the bus..."Maybe THAT is what this was all about, Mom?"

Once we were back at the airport, we had to recheck all our luggage again...this time on our own without our guides help...and we are still missing on very important bag at this moment.  We boarded the plane immediately and then got another announcement that they flight was delayed again...only to be moving again a few minutes later.

We arrived in Guangzhou around 2am and got back to the hotel around 3.  Ailee James slept the entire flight and is truly the happiest, most pleasant baby.

After a quick breakfast, we headed to the medical clinic to get her checked out to enter America.  She did amazing and is quite a chunk!  26.3 pounds and 35. 3 inches tall...right on target with what her updated stated prior to adoption.

She had her heart listened to and her ENT checked and had to do a blood draw to test for TB.  She cried her eyes out over the blood draw and height/weight check but did quite well for the rest of it.

Last week was finalizing the adoption on the China side...this week is all about getting her home! We have to wait two days for the medical results and take them to her US Consulate appointment on Monday morning where we will apply in person for her US Visa.  2 days later, we pick it up (Wednesday) and Thursday morning we head back home.  We will have more downtime here and time to really begin bonding...although she's choosing me over and over again and attaching far better than I anticipated.  She gives us big smiles and is so busy...exploring nonstop!  She is already repeating some English words too...her favorite is "uh-oh!" :)

Thank you for praying...I'm not even sure this post makes a ton of sense as I'm horribly exhausted from yesterday...but I wanted to share and give you a glimpse into the Glory He is revealing.

*Oh yes, and carseats aren't a thing in China.  You typically don't buckle up either.  Just hold your baby and pray.  :) 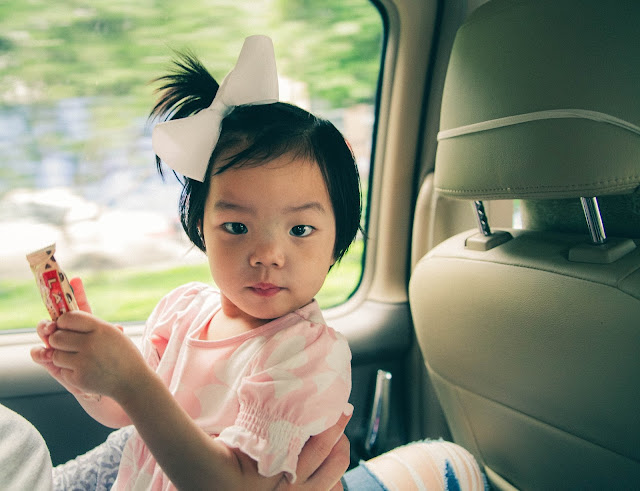 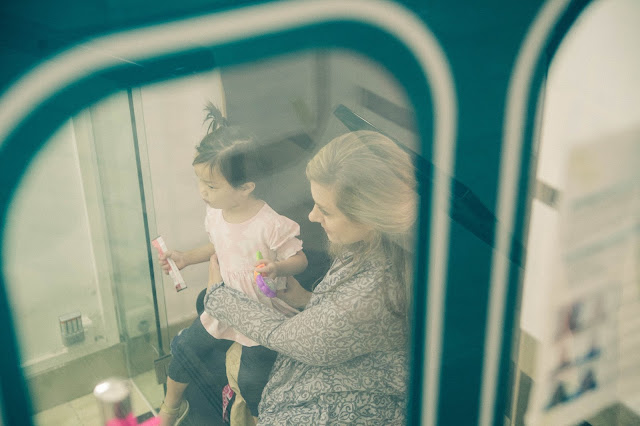 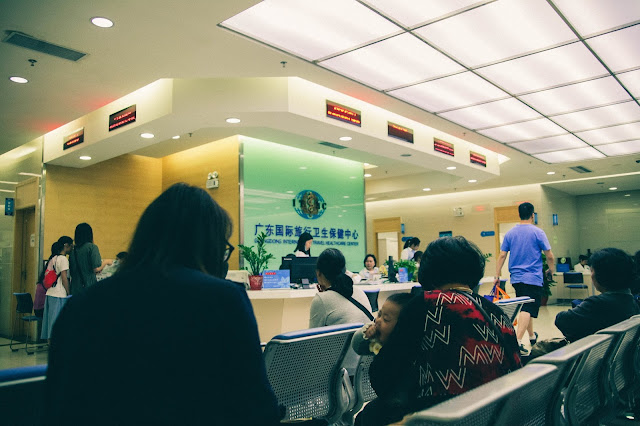 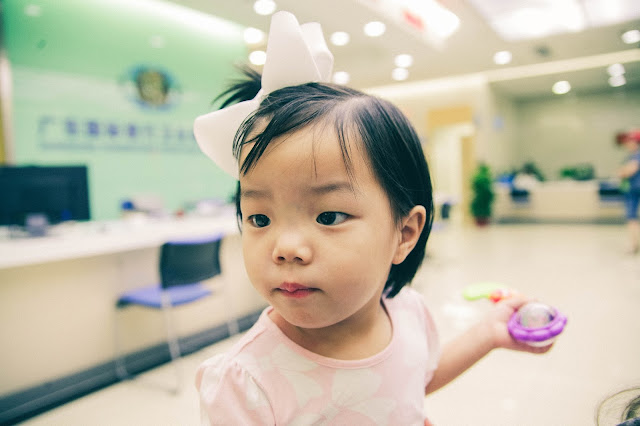 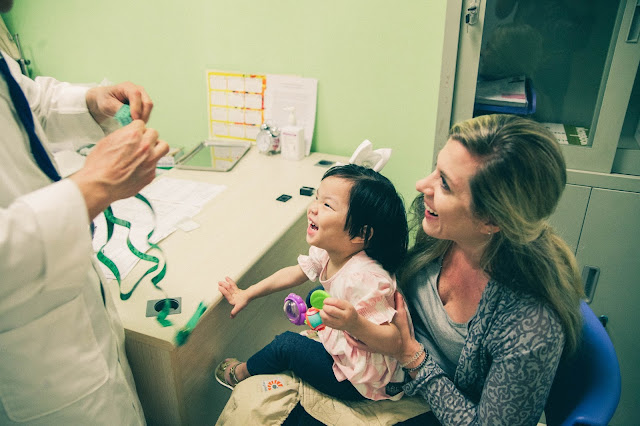 Yes, she has the world's cutest dimples and the cutest little giggle! 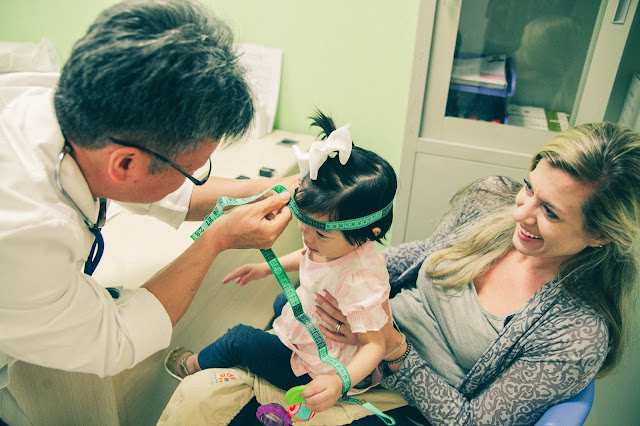 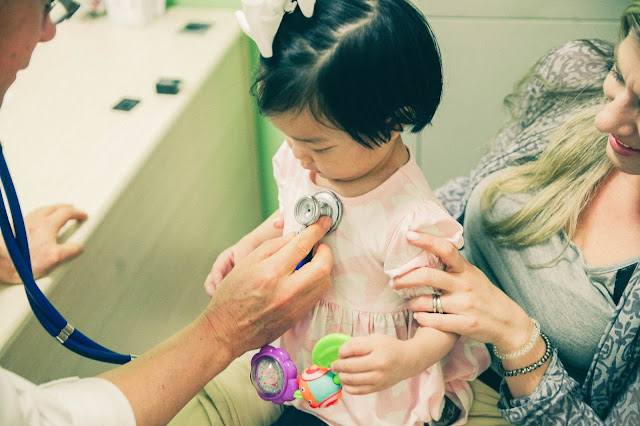 The doctor commented on how good she looked & how perfect she is...we agree! 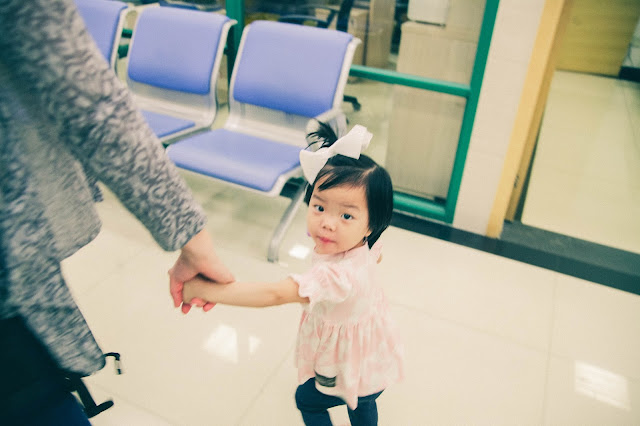 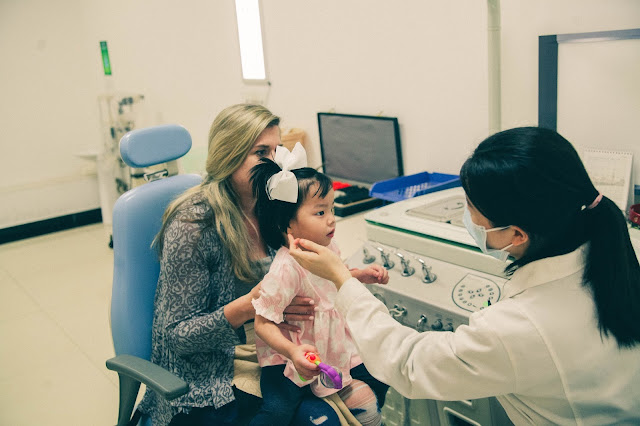 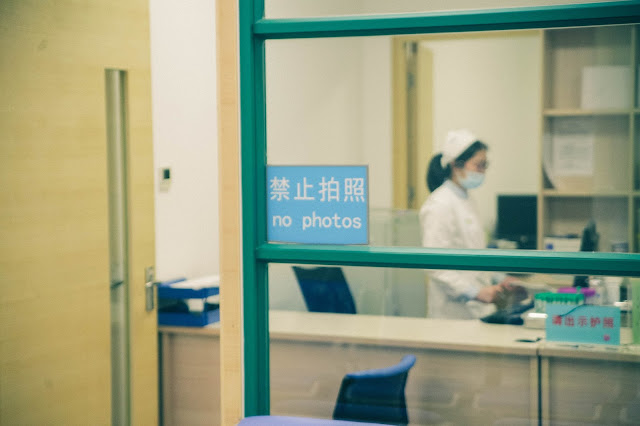 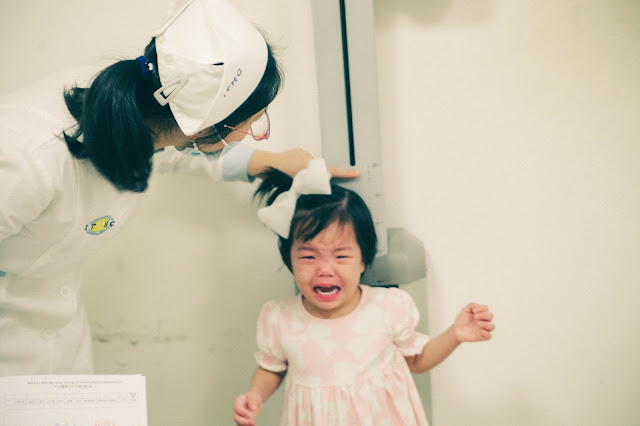 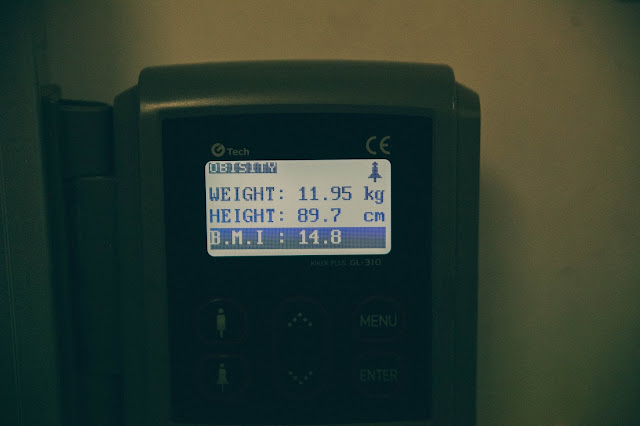 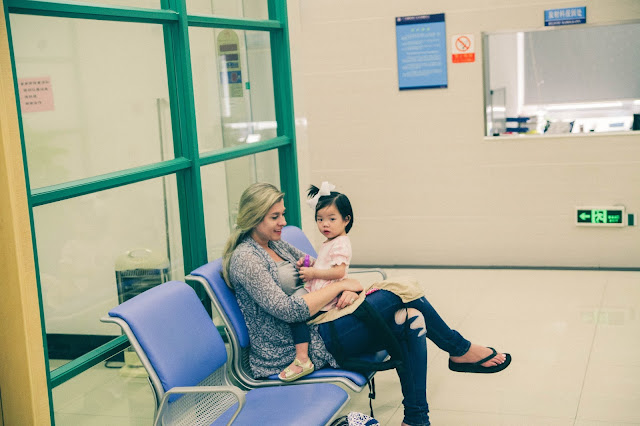 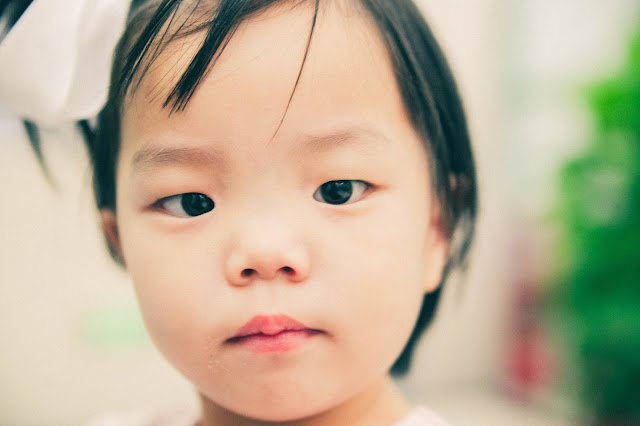 God's grace , mercy and love shows through your story. Your girl is so precious and you can just see her cute personality in the pictures. Praying that the rest of this amazing trip to bring your AJ home goes smooth. Can't wait to read the rest of her story when she is united with your entire family. Jennifer Waldrop