On Tuesday, Miss Priss and I headed to our beloved Charleston for her 1 year post-op MRI at MUSC.  We last took a peek into her noggin a year ago...which was 3 months post op (so technically this was 15 months after surgery but they still call it the 1 year visit).  We saw tremendous progress last year and knew that we needed to give her body time to adjust to these changes to really see a difference...to know if it was indeed going to work.

Basically, her chiari was blocking the flow of spinal fluid in and out of her spinal column and brain.  Her surgeon patched her brain back into a normal position, took away the back of her top vertebrae to allow for more space on the inside and also took about a 1/2 dollar size of her skull out to allow space on the outside of her brain, too.  She still technically has the chiari malformation and always will though...because that actually refers to a malformed skull.  Well, over time, that blockage of spinal fluid caused a cyst (called a syrinx) in her spine.  That further complicates things as those lead to even more problems...paralysis being a biggie.  Once we saw that her chiari was causing the syrinx and that the syrinx was getting larger quicker...we made the decision to intervene surgically.

I mention all that to explain why we need so much time after surgery to see if it helped.  It took a long time for her spine to get that bad and it takes equally as long a time for it to reverse.  Constant steady flow of the right amount of spinal fluid over time hopefully will reduce the syrinx so those big concerns aren't quite so big...you never really expect the syrinx to completely go away though...but definitely hope to see it get smaller (a sign that the surgery was warranted).

So, now that y'all got a crash course in Chiari 101, you understand why this was such a huge MRI for our girl.  It was giving us the big picture.  And gracious was it good!!!

The hospital was buzzing so our wait to go back was a bit longer than usual.  They let me hold her while she drifts (fights) off to sleep.  I figure I'd rather her see me as she faces sedation than some stranger so I buck up for this part and fight tears the entire time.  Thank God she has a mommy to hold her...and thank you Jesus that it is me.  She hates the smell of the anesthesia and the sterile room.  Scrubs make her super nervous and I am so thankful her surgeon has the innate sense to never let his little patients see him in them.  (Honestly, Dr E always wears "normal" clothes or puts a vest over his scrubs around her so even though I tell AG that he's her surgeon, she doesn't believe me.  He is always playing with her and giving her stickers and super fun.  She doesn't even see him as part of the whole medical stuff. Smart, smart guy!).  Little bit finally was snoozing good when I laid her on the hospital bed and headed back to the waiting room.  About an hour later, I was on my way to recovery.  They literally come get me the moment she's out of the MRI so I'm there before she's awake and the first face she sees is mine.  This time, she slept more than usual and had a rougher wake up.  She choked a bit and definitely fought nausea.  This is when my 5 weeks in an ICU comes into handy and the wires are all organized in less than 5 seconds.  Baby girl is so tough though and within an hour she was up and eating...and we were on our way to see her surgeon to get results.

As Dr E walked in, I had nothing left in me as far as patience or small talk goes and just said "Ok.  Was it worth it?"  He gave me the biggest smile and said "I want you to see for yourself."

He pulled up the images...one from today and one from just before surgery.  I had no words.  I welled up with tears and laughed at the same time.  Complete disbelief.  Wow.  God had done this.  I asked if the results are typically this amazing and he said not always.  He was pretty amazed himself. So much so that, unless we see symptoms start to resurface, he only wants to see her in clinic in a year...no imaging needed.

And so he checked her out from a clinic standpoint and told her she doesn't need a pacifier and shared the latest with his family with me, too.  I told him that we'd see him next year with another little doll from China and he responded "Of course, you will!  That doesn't surprise me at all." as he smiled in approval.  I, of course, had to add that I sincerely hoped that he only meet Ailee James while seeing Andie-Grace and that I'm not planning on her being a patient.  He laughed and agreed.

There's a silver lining to every situation and when our daughter was handed to us in China nearly 4 years ago with a piece of paper adding to her already complex medical needs, I wept.  I didn't want to walk through another unknown and I surely didn't want to put her through brain surgery.  But, here we stand, on the other side of this mountain and I couldn't imagine not having this as part of her story and His.  God was writing this a long time ago...and weaving the people and places perfectly into their designed roles to help us walk this road together.  And He still is...writing a beautiful story... 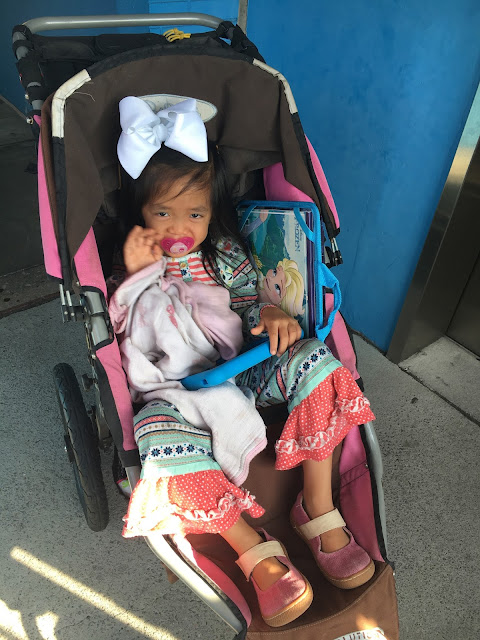 Headed from the parking garage to the hospital.  She was getting lots of "yes!" with device time so she was still relatively happy at this point! 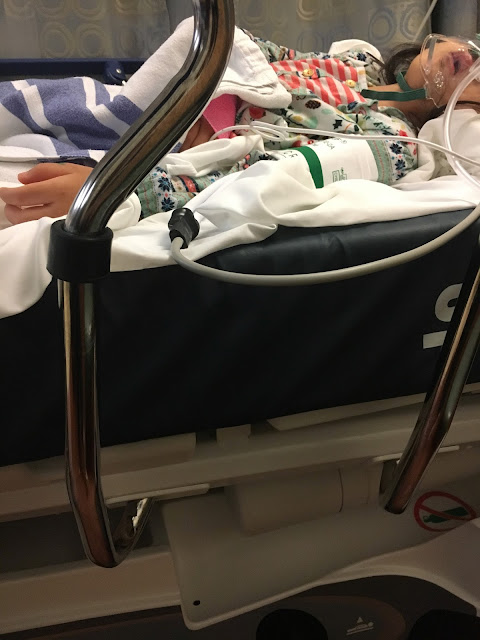 Just waiting for Sleeping Beauty to wake up! 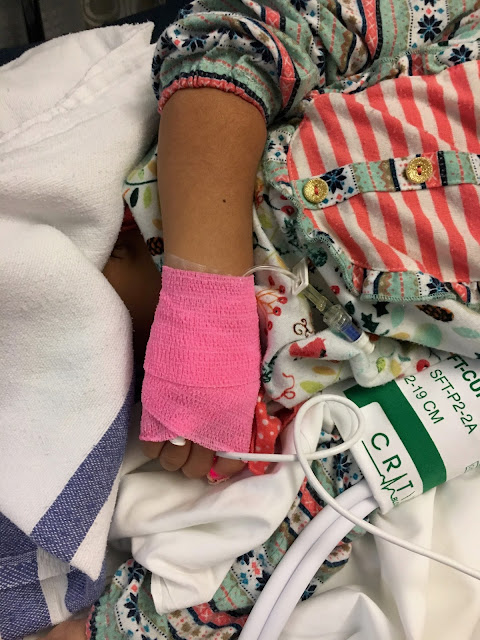 I texted this to S saying that she was going to be upset the bandage wasn't purple.  She has recently become quite a fan of purple. 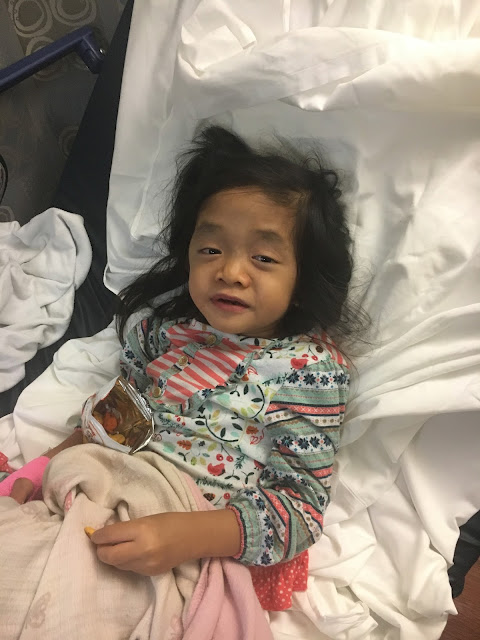 Sweet girl trying to smile while still being half out of it! :) 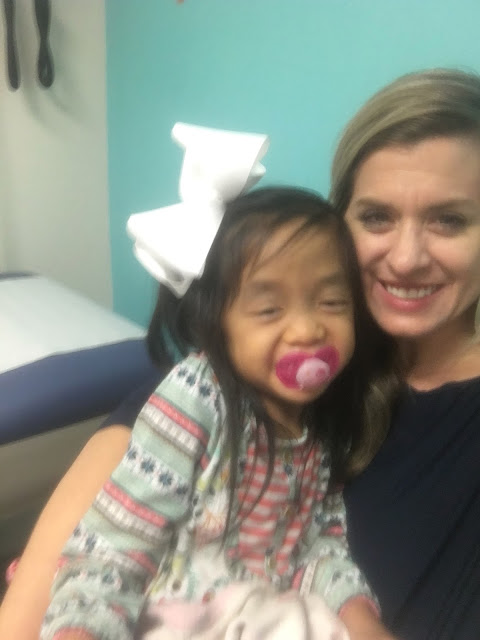 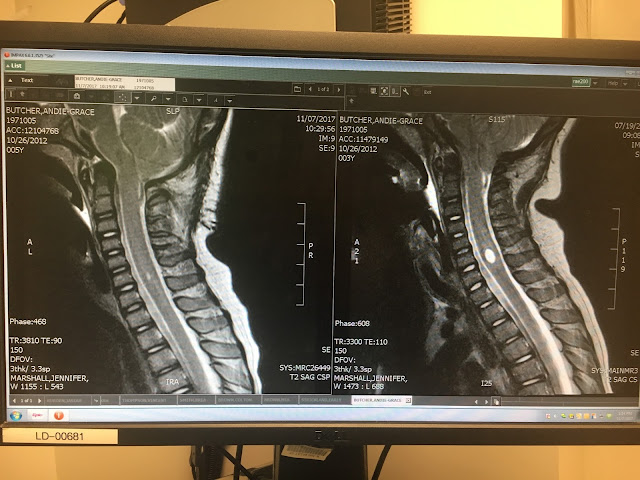 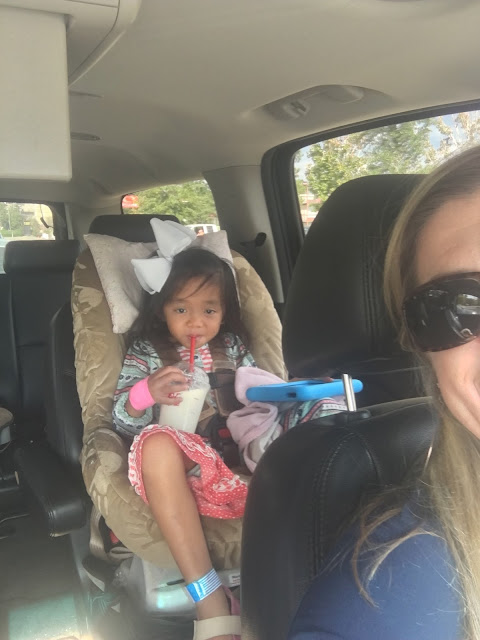 I packed a bag full of snacks for this girl and all she wanted was a Frosted Lemonade and Waffle Fries!  So, she got it!!! 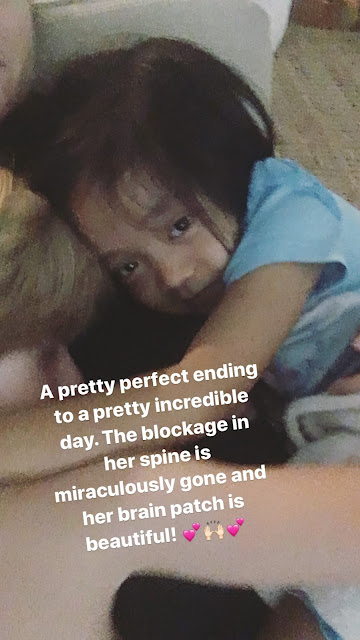