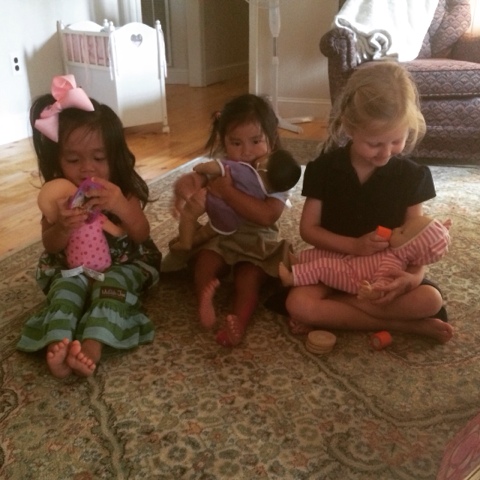 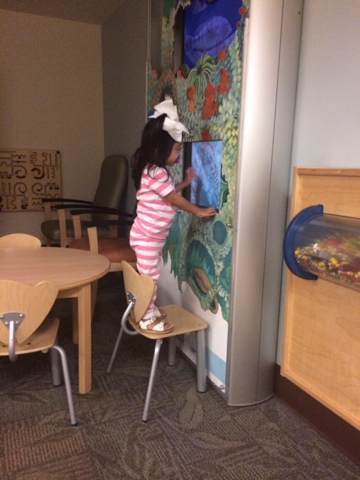 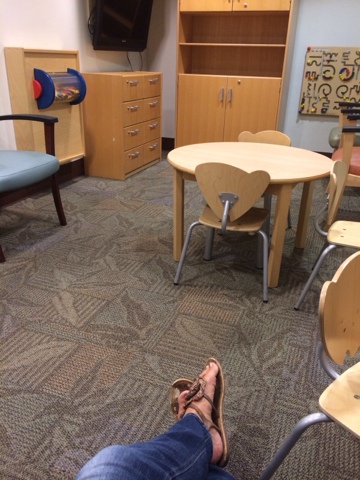 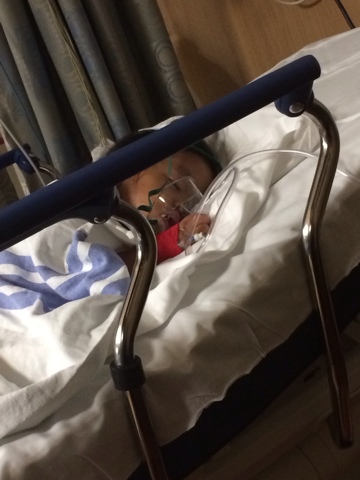 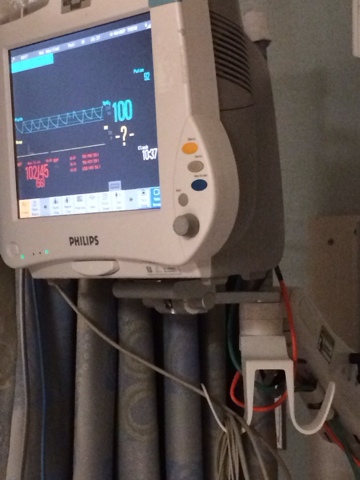 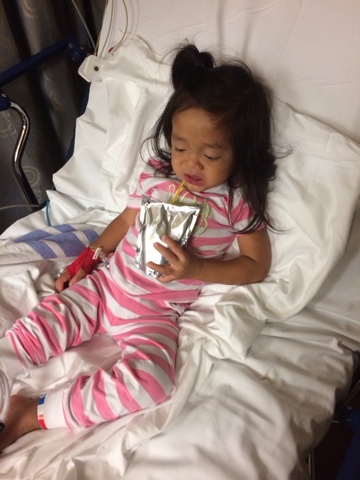 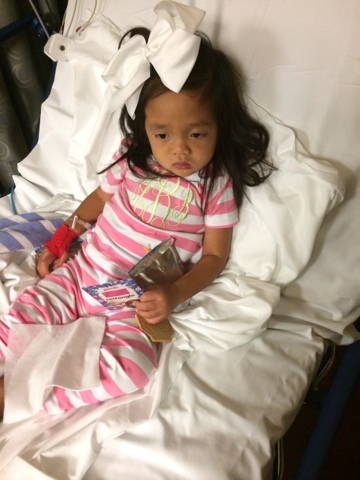 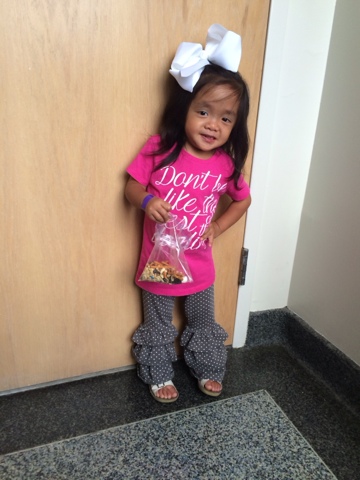 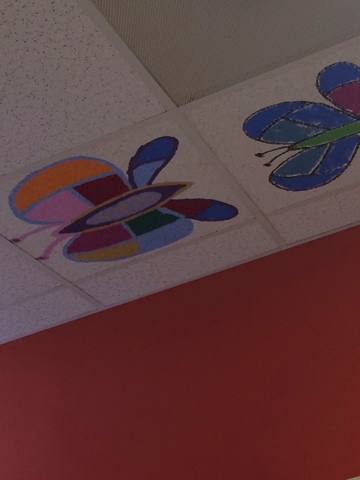 We had a long day in our favorite city trying to get a handle on our baby girl's special noggin!  After staying with sweet friends the night before {hooray for no hotel expense and a yummy homecooked meal!}, we were at the hospital bright and early for an MRI.
AG was a rockstar!  She walked right into that room waving like a little beauty queen and greeting everyone.  She loves being the center of attention...just a little! ;)
After she woke up, we visited our favorite folks in the PCICU and grabbed a quick lunch so that we could hurry over to meet with the neurosurgeon by 1.  I had to snap a shot of her satting at 100 in recovery!  Ha!  The precious child that has more specialists than I ever knew existed and was "special needs" because of her heart condition needing intervention ASAP has a 100 pulse ox.  No meds.  No surgery.  Just God....and a whole lotta love.  Her only need was a family.  The rest just keeps us humble and thankful and teaches us more than we ever would have known otherwise.
Dr. E confirmed what we already knew...for the most part...she has a really severe Chiari malformation.  As in her tonsils in the back of her cerebellum are basically all the way down the back of her little neck into her spinal column.  His first words upon looking at her scan were "some surgeons would have her in the OR within 5 hours".  Um...I just knew we weren't going home at that point.  Then, a big BUT...and he went on and showed me all the other scan photos.
Apparently, a chiari this severe *should* be causing some more issues.  Like fluid issues in her spine and fluid not getting around the chiari and into her brain okay and sleep issues and choking issues and more.  But, not her...at least not as far as we can tell.
The scan of her spine and cord were perfect.  The fluid is somehow making it's way around her chiari and getting where it needs to go.  Nothing else was concerning in the least on the scans.
The chiari is not just going to go away but there is a chance it could improve over time.
God gave her bigger brains than a skull to hold it all and Dr. E and I agreed it just makes her all the more amazing!  Did I mention that he spoke Mandarin to her right when he walked in the door and she answered him!?!?  She doesn't show all her cards all the time and is definitely picky about who she will answer in her native heart language but apparently those DVDs are keeping it up more than I thought! :)  She was pretty enamored with him from that point on.  ;)  And he's not Chinese...so I'd really like to know where that came from.
The truth is that she may need surgery at some point...but we just don't know enough yet to make that call.
So, the plan is to get a history on her.  We are going to repeat her MRI every 6 months for a couple of years to see if it changes {given that her health stays the same and nothing comes up making surgery a requirement before then}.  Once we see what this little booger's going to do, we will be able to better make a call on neurosurgery.
And, if you're like me, you've probably never heard of a Chiari Malformation...so here's a little info!
http://www.conquerchiari.org/index.html
It's much more common than you know but many never know they have it until something happens like a car accident giving you whiplash and then you have an MRI and then you find out.  Or a sports injury or just horrible headaches over time.
If we hadn't of looked into that sketchy hydrocephalus report from China, we would probably never know ourselves.  Oh...and speaking of that hydro report...Dr. E just laughed and said "Absolutely not!"  ...and there were butterflies on the ceiling tiles, too.  ;)
Posted by The B Family at 3:41 PM

Sounds like you have one amazing little girl, but you already know that. My son (with noonans) just had an MRI to check for Chiari. What Mandarin CD's are you using??

LOVE LOVE LOVE the new header photo and the pink bow??? It is as if Annabelle is there with you all! I had this instant warmth wash over me ...She is watching over them, she is holding them together in a big, warm, pink bow of a hug!