The day couldn’t have started anymore perfect than with Wyatt crawling into bed with us at 3am.  He wanted to be close and knew this day was special.  We snuggled until the alarm rang at 5:40 and were up getting race ready.

Scott had a few birthday cards for us…one for me, one for Wyatt and one for Annabelle.  We spent a few precious moments each reading our cards…with Scott reading the card for his baby girl last. 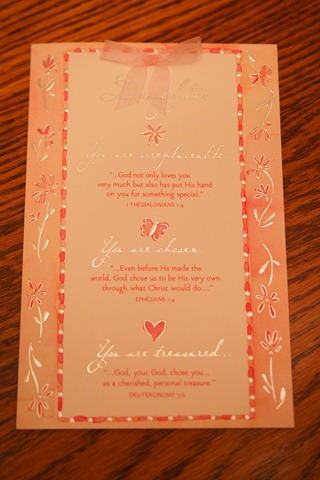 The words are perfect and it’s even got a pink bow & a butterfly on it.

You are irreplaceable…”God not only loves you very much but also has put His hand on you for something special.” 1 Thessalonians 1:4

You are chosen…”Even before He made the world, God chose us to be His very own through what Christ would do.” Ephesians 1:4

You are treasured…”God, your God, chose you…as a cherished, personal treasure.” Deuteronomy 7:6 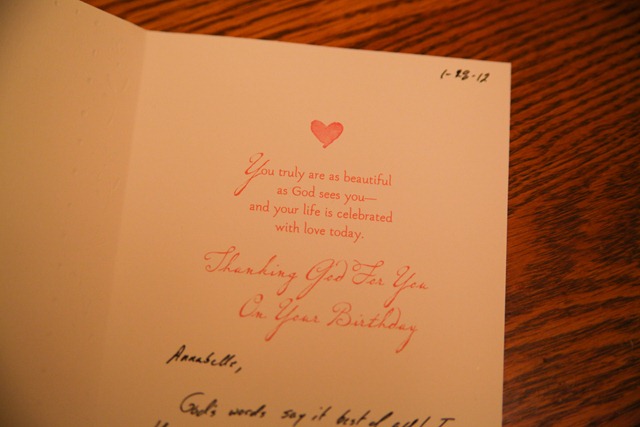 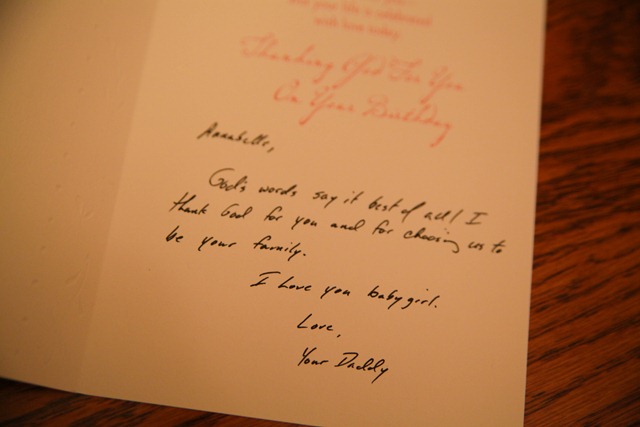 He shared why Thursday had been such a tough day for him as he came home with tears in his eyes.  He had just spent time mulling over sympathy and birthday cards…two things that should never go together when shopping for your daughter.  His heart is so pure…his motives precious…I know she loved it and was smiling the entire time her daddy was reading her birthday card to her!

Grandaddy arrived shortly thereafter to keep Luke for us while Scott, Wyatt, my sister and myself headed to the Red Nose Run!  I was a big ol’ ball of nerves and couldn’t hardly eat a piece of toast.  I didn’t know if it was the day itself or the run, but I was a nervous wreck!

We met up with three awesome ladies who completed Team Annabelle… Ansley, Lea, me & Jennifer!  It was such an honor to have them wear pink and run for our girl!  The three of them plus another good friend of theirs get together to run in the mornings and now I am thinking I need some running buddies!  I loved having someone to talk to…for the first three miles at least! 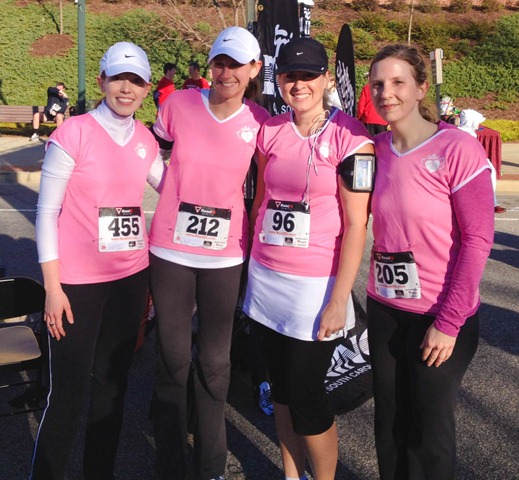 The weather was beautiful but quite chilly at 7:45.  I thought for sure I had messed up and should have worn a long sleeve shirt, too.  But, it felt perfect after the first mile!  The high ended up nearing 70 and the sky was blue all day long.

As far as the race went, I felt really good.  Surprising for me since I don’t normally run in the morning.  I felt good the first three miles…almost easy.  Then, I could tell the long uphill course was starting to take a toll a bit.   I struggled up a couple hills between miles 4&5 but by my 5th mile my second wind had kicked in and I felt great coming up the last hill and down to the finish.  I prayed most of my 4th mile and let my praise music keep me focused on the day…with glimpses of Annabelle often.  I never stopped!  Not even for water!  I did walk about 8 seconds to open my jelly beans at mile 4 to pop a few for a little boost but that was it!  I finished in 1 hour and 3 minutes (although the course was actually 6.34 instead of 6.2). ;)   For my first 10K…on my daughter’s birthday, I was very happy!  My goal was to finish and not be last…so I met them both!

I think the best part of the race was having my husband by my side the entire time. Scott has run more than usual as a result of my training but not more than 5 miles so I was so happy to have him finish right along side me.   It seemed fitting given the occasion. We have a beautiful marriage which only got that much stronger 4 years ago…it’s always an honor to have him beside me. 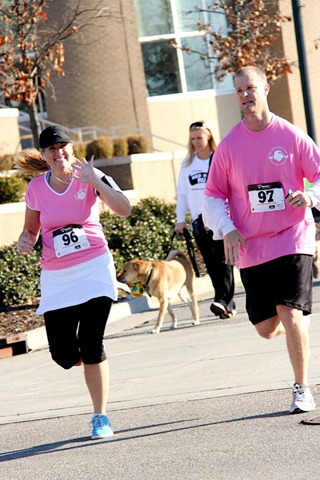 This is just before the finish line!

Our dear heart family friends, The Skiff’s, came out to be there with us, too!  Mike ran the 10K in something crazy like 44 minutes and whooped all our tails!  His wife, Malynda, is expecting baby #4 so she cheered with her oldest and youngest sons and was our photographer!  Our second babies were cheering from Heaven. :)  They have both been an incredible inspiration and support to me in this running journey.  If I ever have a question, I ask them!  Now, they’ve got me thinking that I can do a half marathon in April…and I’m going with it!  I figure it’ll only make me that much stronger for the Cooper River Bridge Run anyhow. 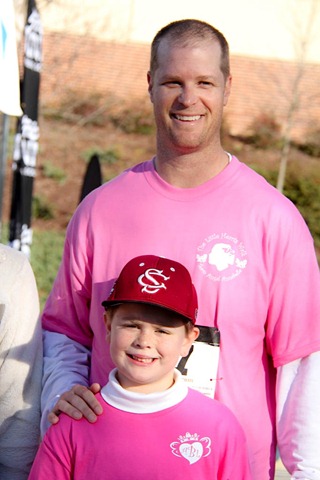 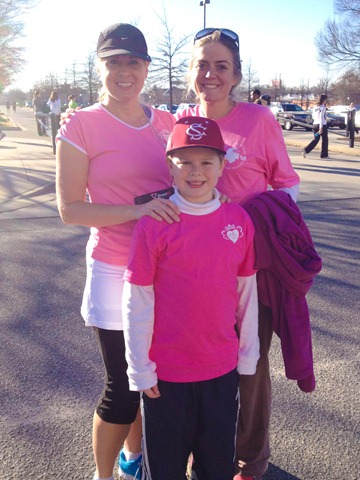 My sister and Wyatt were supposed to be walking the 5K portion of the race but apparently Wyatt wanted to run most of it.  He was ready to run for his baby sister and loved doing that for her!   And, I was so happy to have my sister there to take care of Wyatt for me so I could focus on my run.  He loved every minute of it!

Before leaving downtown, we hit Cupcake for half a dozen of their daily specials…Red Velvet, French Toast & Double Chocolate! We still had no appetite so we ate them later.

We enjoyed a relaxing afternoon surrounded by my daddy and sister spending time with us.  Grandaddy took Wyatt with him fishing on the lake for a few hours so Luke could nap and Scott and I could have some quiet time together.   He met us at Annabelle’s special place just before sunset for us to send her balloons… 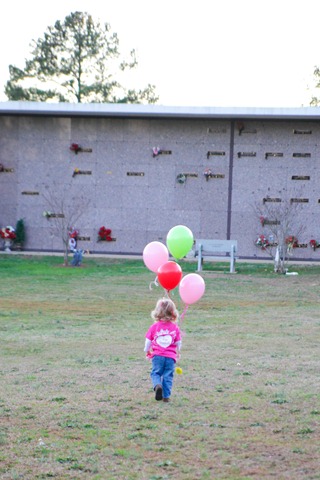 Luke knows exactly where to go as soon as we pull up…he picked out a green balloon, Wyatt sent her red, and Scott and I sent pink. 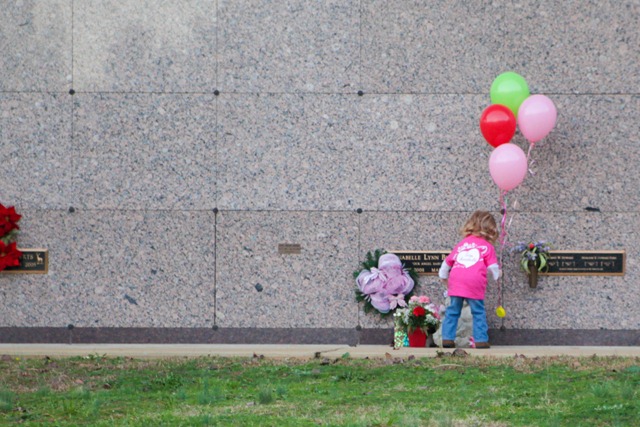 Annabelle also had received a beautiful red and pink flower arrangement so we brought it home to water it and take care of it for her. ;) 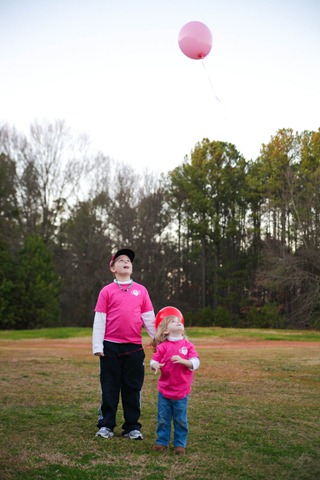 The boys love sending her balloons and I firmly believe that she gets every single one of them! 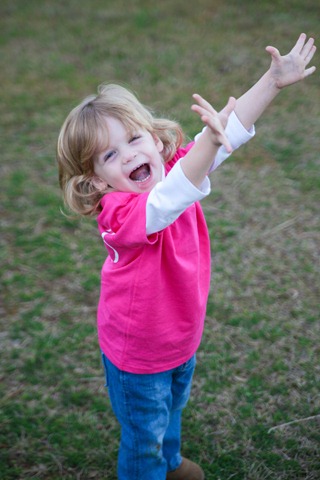 When we got home, we were greeted with a special treat from even more special friends….Annabelle’s first heart friend, Evie’s family delivered butterfly cookies for her birthday!  I had a hard time getting the boys in their jammies before they wanted to open them up. 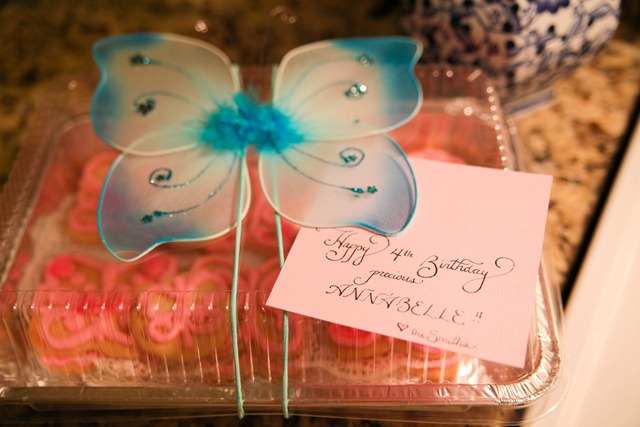 Luke is a very sneaky little bear and he was the first to get to them. Before dinnertime, of course!  So…since he insisted…we had cupcakes before dinner, too.  I imagined it’s probably much like her birthday party went in Heaven.   Who needs a meat and three anyways when you have butterfly cookies and cupcakes?!? 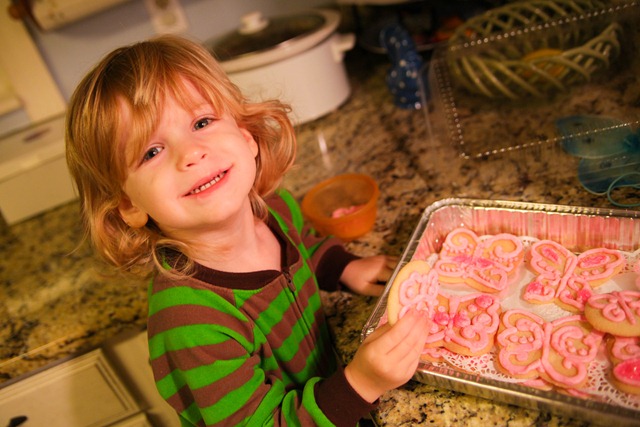 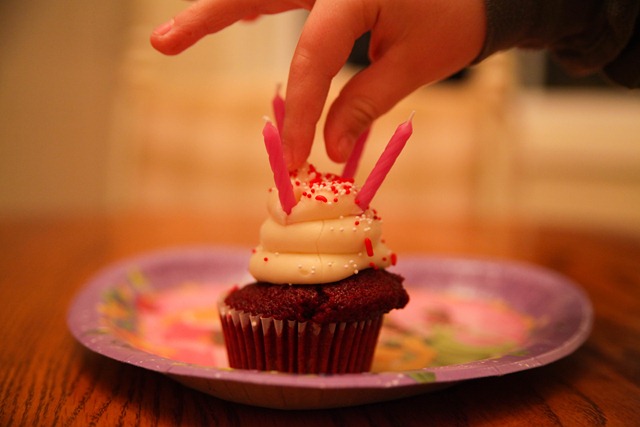 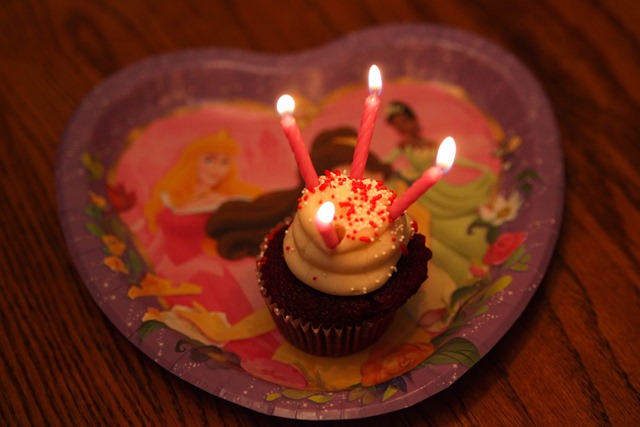 What an incredible day! I was thinking of Annabelle and Lindsay running around together. I'm sure they were. Lots of love and heart hugs!
Amy

What a perfect day. God is good and forever faitful. That's all I know.

What a beautiful day even in the midst of pain. Thank you for sharing your sweet girl's story!

Oh my heart! So sweet and precious... and thanks for this beautiful post for sweet Annabelle. Big heart hugs!!