Wyatt had his first game of the fall baseball season last night.  The Sand Gnats won with a crazy high score of 22-1!  Wyatt hit a Home Run his first at bat and was 4 for 4 for the night!  He’s at home on the ball field, for sure! The boys had so much fun…Scott coaching and Wyatt playing.

I would love to now take the opportunity to insert some incredible pics of my firstborn hitting it high into right-centerfield but I was too busy screaming for him to run the bases and watching to make sure the 2 year old didn’t.

This season is definitely different.  It was getting difficult in the spring but now it’s just all out impossible…to sit and watch a ball game with Little Bear.  He either wants to play in the dirt or run on the field while screaming “BALL” at the top of his lungs or climb the dangerous metal bleachers or steal little girls’ hot pink strollers with babydolls in tow.  He managed to do all of those things and then some.  I finally gave in and bought him skittles and popcorn with hopes that he would sit still for three minutes but that didn’t really work so well either.  So, next game I am taking his “pup-pup”.  I never thought I would leash my child but I’ve never had a Luke before either.  He loves it and begs to put it on for Wyatt to “walk” him around the house.  Then, maybe I’ll get some pictures for Wyatt to remember his fall ball season by.

But, as for last night…I did get two! 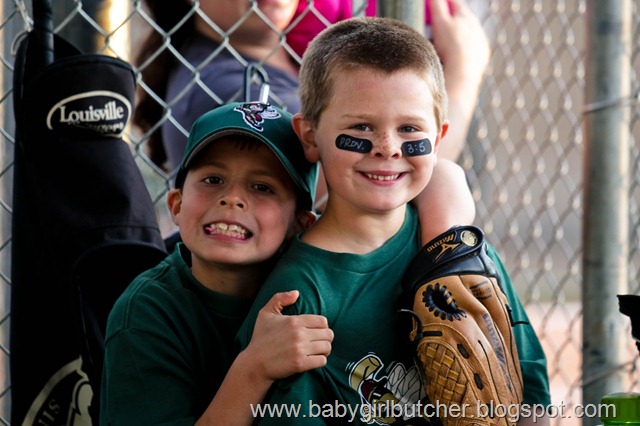 Wyatt and his buddy, Davin!  These boys share so much and I just love watching their friendship grow over the years.  God definitely brought these two tender-hearted boys together at just the right time! 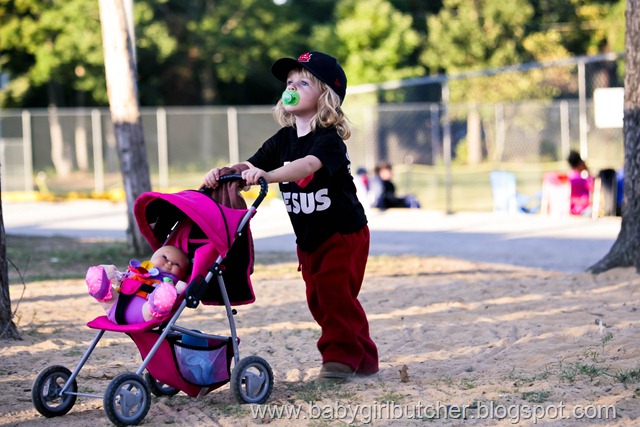 Told you he was stealing a hot pink stroller!  ;)

How exciting! A HOME RUN! I know you were crazy proud of your big boy! :) And little man with the paci, I love Jesus shirt, and hot pink stroller is too much for words. SOOOOOO cute. That's a Sr. year yearbook picture if ever there was! :) Also funny that he loves his "pup-pup"... I used to think the same thing about "leashing" up my kids...but we got a bear one for AB and she LOVES it, too... she yells, "Hold mine's tail, you got my tail?!?" (she thinks the leash part is a "tail") Ha... :)