Some things get documented faster than others around here!  I was going through my pictures on the computer that I’ve uploaded and never done anything with and realized that I completely forgot to add these to the blog!

It happened all very quickly.  He started refusing to nap late in June and hated his crib.  I truly didn’t think he’d ever hate to go in it.  He’s always been the easy one to get to sleep and loved having his alone time in his crib.  So, since he refused we let him sleep on the bottom bunk in Wyatt’s room one night.  That quickly turned into 2 nights and then 3…you get the idea.  He still wasn’t napping so we went ahead and made the move.

The 100 plus year old white iron bed came up from the Annabelle Baskets room.  I desperately needed more space in there anyways.   The bed originally was my great grandmother’s as a little girl, then my grandmother’s,  then my mom’s and her sister, then mine & my sister’s, and now the boys.  It was Wyatt’s first big boy bed before getting his bunkbeds.  It’s got the original springs and is the most fun to jump on, too! ;)

With this change happening so quickly, I didn’t really have time for it all to sink in that this was most likely the last crib I’ll ever have in my home (until grandbabies!).  It hit me as I was making up Luke’s new big boy bed.

His room was first her room.  The crib we had just disassembled to put into the attic hadn’t been taken apart since we put it up for her over 4 years ago.  There was a time where I just knew that we’d never have another big kid bed in there and that room would always be a nursery for a little girl who didn’t need it anymore.

So, as much as it was a joy to see my baby boy growing up…it was also very painful to know that she never got beyond her crib when she was with us.  That cherished heirloom iron bed that begs to be adorned in ruffles and pink would only ever have all things boy on it.

Wyatt caught me in my moment of grief and asked why I was sad.  I explained to him that I was sad because everyone in my side of the family had been in that bed for 5 generations except his sister.  That’s when his little genius memory proved me wrong.  He said “but Mommy, Annabelle did get in this bed.  Remember she took a nap in it with me.”

I had completely forgotten about that blessed spring day.  Belle was napping on me and Wyatt needed some quiet time but he only would lay down if she could lay with him…in that old iron bed that was his at the time.  We even have the pictures to document it. :)

My heart was full!   Moving forward proved to be hard and yet okay once again…she may not be here with us physically but she is always with us in spirit and the sweetest memories ever made.

Luke is loving his big boy bed and slept the entire night through his first night in it.  He’s added a pink hairbow to his stuffed monkey that he’s named Annabelle and snuggles with it every night.  He’s also found out that it’s very good for jumping! ;)

And, just for my memory…pictures of his new bedroom…before & after! 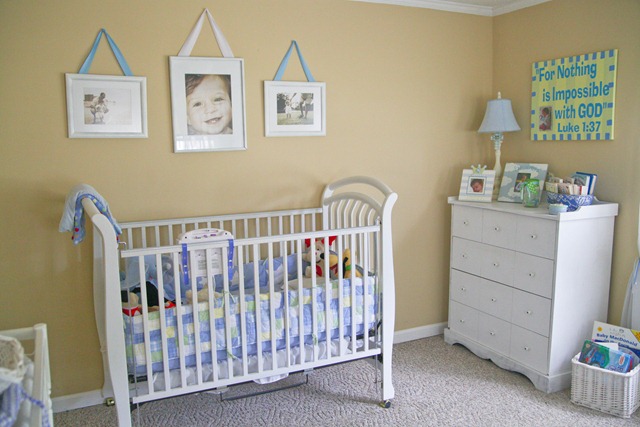 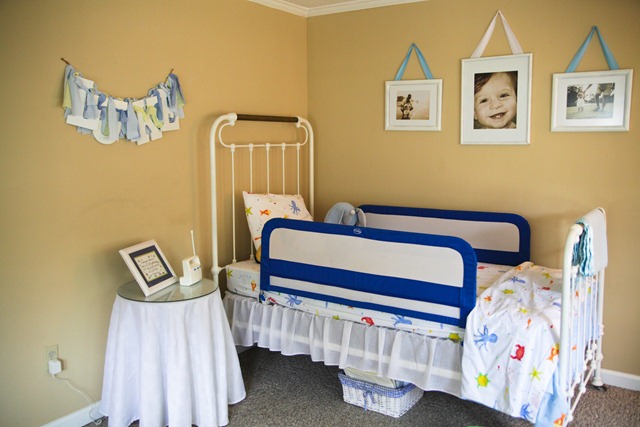 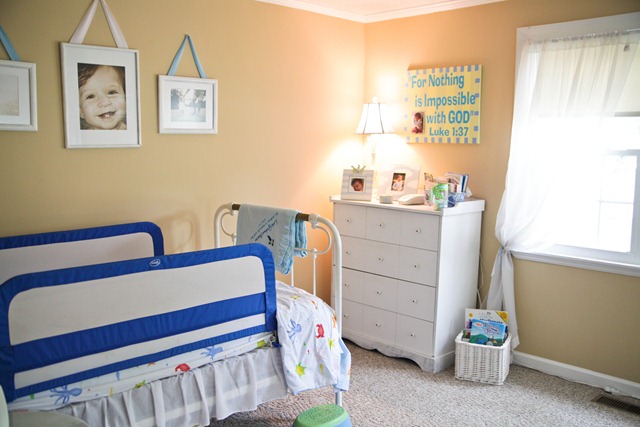 The other thing that I wasn’t prepared for was his bedding! Ugh!  Thankfully, I had bought an under the sea type bedding on clearance at Pottery Barn Kids years ago (thinking it would be cute summer bedding for Wyatt).  It had not even been used.  Luke loves it but I’m thinking I need to at least find him something with a comforter or quilt before the temperature drops too much more.  Oh, to be the baby brother!  :)

How perfect that Annabelle did indeed get in on that special tradition. Obviously Wyatt treasures those precious memories with his little sister even though he was just a little guy himself. So awesome, and so special!