It was only a matter of time…

Luke’s now almost 6 months old…so, I guess it was bound to happen eventually.

He’s never been a big fan of the bathtub- completely unlike my first two babies who loved relaxing in a warm bath.  From day one, Luke didn’t care much for it.  At first, he would just fuss the entire way through.  That worked for a while and I just sped through the entire thing as quickly as possible. I have informed him time and time again that he has too much hair not to like his bathtime though.  He especially doesn’t like the water coming anywhere near his face…which makes washing his hair just lovely! HA!

Just tonight, as I was giving him a bath, I laid him back to begin the fiasco that is washing his hair and he decides to do his famous frog legs dance in the water.  Y’all, he had water splashing all up the mirror!  I kept trying to get him to calm down but he only would get a little bit docile for half a second when I sat him up…which resulted in water coming down his face…which resulted in trying to lay him down again to wipe the water out of his eyes…which just kept the frog legs a goin’!  Needless to say, more water ended up outside of the tub than in it!

That’s when it happened…for the first time in his little life, Luke was called by his first AND middle names “Luke Graham, you are making a mess!”

Oh my goodness, he just gave me the biggest smile and starting laughing hysterically!

Can someone please just grab a sharpie and write “sucker” across my forehead already???  He’s got me wrapped!

I have a sneakin’ suspicion that this isn’t the last time I’ll use both names on that little bear!  Wyatt knew it meant business but Luke, oh, he’s got us all eating out of the palm of his hand! 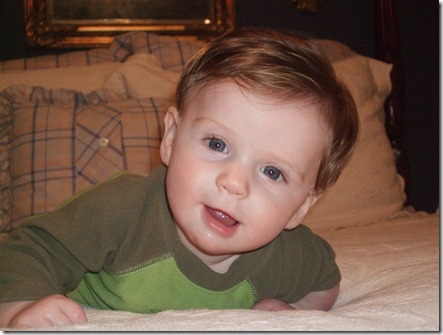 Wouldn’t you be, too?

Of course! He is so beautiful and absolutely adorable! He has all the ladies in the nursery smitten with him! :)

Hey Rebecca! Oh my goodness...that little munchkin is rotten already!! And it's only just begun! He is so adorable, and his "rottenness" just makes him that much more cute!! I love this story!! Oh, and thanks for the van mom support - ha ha! It is totally the best :)
Love you,
Ashlee :)

oh i LOVE that sweet face!!! how could you NOT?!? he is beautiful!!! sending my love to the Butchers :)

This cracks me up because I'm pretty sure Brady didn't have any hair worth washing until he was about 18 months old. Lukes hair is beautiful and I think it makes him look older. He looks like such a little boy not a baby. :) He's so cute!!

Well of course we would! Who could resist that precious lil boy!! He is beautiful Rebecca....

Absolutely! He is PRECIOUS!! Look at that face...you know you'll be using his whole name...a lot! :)

ABSOLUTELY!!! Oh how I can't wait to get my hands on the boy! Muah!

oh yeah! just look at those eyes! Learn this phrase Lukie...
"Mommy, I want a pony!"

Yes, he would have me doing back flips...he is ADORABLE!!!!