Boys will be boys...

My dad has been itching since I was pregnant with Wyatt for the day when he would be old enough to take him to his first major league baseball game. A little background...both my dad and Scott pitched in college so baseball is THE sport in their eyes. Lucky for them, Wyatt loves it, too! That day finally came this past weekend. So, Grandaddy, Scott and Wyatt headed off on Friday to Atlanta to see the Braves play the Boston Red Sox (Scott was loving it since Boston is his favorite team). They hit a sports store on the way down, spent the entire evening at the ballpark (seriously, they didn't leave until 11:30- only 4 hours past Wyatt's bedtime and he was on an all-time high when I talked to him at almost midnight) and then spent Saturday shopping at the Bass Pro Shop in Atlanta & eating at the infamous Varsity. The boys returned home Saturday evening absolutely pooped...but with memories to last a lifetime...or, at least, until next year! 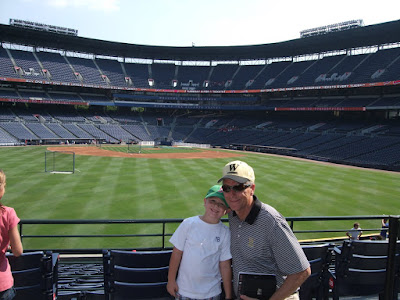 Wyatt and Grandaddy at Turner Field 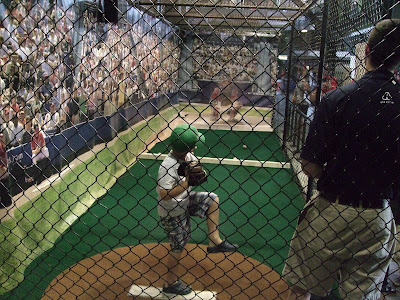 Wyatt throwing strikes in the kid's zone! He was pitching at 31 mph & hitting the glove! Not too shabby for a 5 year old! 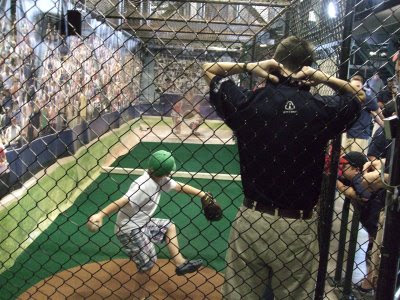 I get a kick out of these pictures. He's so serious! He was the youngest kid to get in and pitch, too. 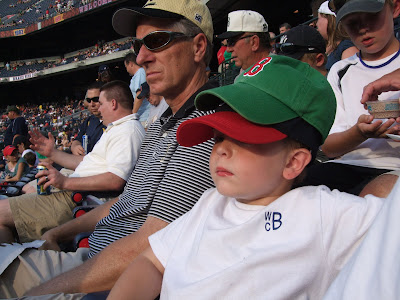 Wyatt wore his Red Sox hat but was given a Braves hat when he pitched so he wore both of them throughout the game...usually changing them back and forth to the team who was doing the best at that moment. After Big Poppy's homerun, he left the Red Sox hat on!

Boys will be boys!

Love it! What fun memories! Our boys love it when we can get over to see the Mariners (even though they aren't very good). Hopefully you had a relaxing time to yourself while they were on their baseball adventure.

Wyatt looks completely professional pitching... I'm impressed! It seems that Wyatt, Scott, and your Daddy have such a special relationship! Vance played golf in college and Noah seems to have inherited the love of golf too... it is so special that they can share the same passion! I love seeing the bond that develops between father and son! Great pictures!

OK, this was a trip to remember for sure! I just LOVE the WCB t-shirt too. Wonderful memories to last forever.
Love you~
Suzie

What an awesome experience.... I know your dad was beside himself.

It is against Georgia laws not to stop at the Varsity while going through Atlanta. They are the BEST!

He's a natural! Looks like you need to get ready for lots of "bleacher butt" and video taping in the future!!! Ha! Hope you're feeling well and surviving pregnancy + heat. Getting closer, right!?! Sending hugs your way!